Despite Vanuatu Kava Store’s claim that Tanna Kaolik is the strongest Kava from Tanna Island in Vanuatu, Tanna Kaolik is overall a relatively mild Kava that is appropriate for weekday consumption. I thought I was going to be getting myself into something overwhelming when I squeezed out a batch of Tanna, but in the end I was able to drink about 5 cups and only get a mild buzz with a little bit of pleasant tiredness.

Vanuatu Kava Store’s two Tanna Kavas – Tanna Kaolik and Tanna Marang – both come from Tanna Island in Vanuatu. The video featured on Vanuatu Kava Store’s website which is used to aid Kava drinkers in how to brew Kava features scenes from Tanna Island.
Tanna Kava is definitely not a “strong” Kava, as advertised on the VKS website. Again, it is difficult to know whether this is a problem with consistency or just because it is simply not a strong Kava. It is, at best, a slightly relaxing Kava that provides a good way to wind down after a long day. Unfortunately for Tanna Kaolik, there is already a perfect Kava for that – Malekula Magic. If I’m putting down money at the Vanuatu Kava Store, it’s going to be on Malekula Magic. 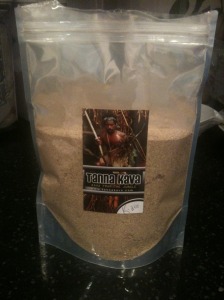 In terms of taste, it is a pretty run-of-the-mill Kava with no really impressive differences. It has a pretty mild numbing effect and can be described as a slightly peppery, somewhat bitter Kava that is comparable to other Vanuatu Kavas, such as Nakamal at Home’s Black Sand. Again, I am not a huge fan of the bouquet of flavors provided by Vanuatu Kavas – I prefer the milky, nutty taste of a Tongan Kava or the fresh, delicious flavor of a Fijian Kava. That being said, VKS’ Malekula Magic is a Vanuatuan Kava that is prepared by peeling the roots before drying and grounding them. Reviewed earlier, Malekula Magic is one of my favorites. Tanna Kaolik is not.
Taste – 7.5/10
Effect (Mind) – 7/10
Effect (Body) – 7/10
Strength – Mild
Vanuatu Kava Store’s Tanna Kaolik – 7.2 out of 10 shells

Farmer and humanitarian aid specialist. View all posts by Kavasseur